Is Anger and Resentment the real cause World War 3? 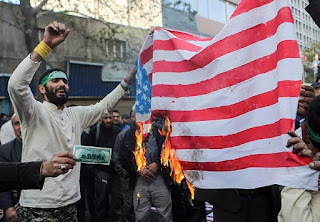 World war 3 is upon us. Tensions with Iran have never been higher. President Donald Trump ordered an airstrike against Qassen Soleimani, the top general of Iran's Quds Force. On January 3rd, 2020 a United States Drone strike killed the Iranian general near the Baghdad Airport in Iraq. With great fervor, Iranian Parliament chanted "Death to America" in their Capitol of Tehran in Iran just 2 days later.

The Hatred Born from the 1980s


This point in history marks the pinnacle of hatred and distrust in America. The negativity in our society that got President Donald Trump elected is still growing. It's really easy to blame World War 3 on Donald Trump. The sour attitudes that got Donald Trump elected have been brewing in this country for years.  Ever since the 1980s manufacturing jobs have been leaving the United States.

In the American Mid-West, thousands of White Americans were angry about losing their jobs. These manufacturing jobs could support a family and an income like was hard to replace. When someone has the traumatic experience of losing their job they look for reasons has to why this happened.


Placing the blame outside of yourself is the easiest way to get over your pain. An easy target was minorities. Immigrants and trade deals, regulations and globalization blamed for manufacturing being wiped out in the United States.

President Trump is the physical manifestation of the anger and resentment in the United States. This state of mind is addictive. This grudge that Americans have against others is only damaging ourselves. We are all ultimately going to pay for the direction that this country is going in.


If used that energy that we put into blaming others we could help ourselves get out of this hell. World War 3 is pure anger. Iran is devastated over losing Qassem Soleimani. The United States and Iran will be paying this price for years to come.

Popular posts from this blog

The Symptoms of Depression in Men will Surprise You

February 08, 2020
Men's mental health is a hidden crisis in 2020. Society has taught young men that they are supposed to be tough and suppress emotions. But reality proves that if problems are ignored they only grow over time. The men's mental health problem has been ignored for decades. While millions of men are confused, isolated and possibly contemplating suicide. Getting men to report symptoms of depression is at the heart of this issue. The biggest barrier for men to seek mental health services is "stigma". Mental health stigma is the idea that mental illness is not real. Society puts pressure on individuals to be mentally stable and normal when it's never that simple. Mental illness needs to be normalized to the level of physical illnesses.  Unfortunately, Mental health has been reserved as an afterthought. As if anything you feel inside your mind doesn't matter. But sadly our thoughts drive us to make decisions in the real world that affect our physical healt
30 comments
Read more

The 9 symptoms of BPD in Men

March 22, 2020
Borderline Personality Disorder in Men Boarder line personality disorder is something that a lot of men suffer from. There is such a bad stigma with the name borderline personality disorder. It is a very misunderstood disorder. Many therapist will turn away patients diagnosed with BPD because many therapist are not equipped to treat these patients. Dialectical behavioral therapy (DBT) focuses on teaching coping skills to combat counterproductive emotions. This can be used as a possible treatment for BPD. Cognitive behavioral therapy (CBT) helps address the negative thinking and behaviors associate with BPD. Please consult a mental health professional for diagnosis and possible treatment. The 9 symptoms of BPD in Men 1. Irrational Fears of abandonment and frantic, desperate efforts to avoid it. 2. Relationships can be difficult with BPD. They are characterized with alternating periods of idealization and devaluation. 3. Persistently unstable self-image and sense of ide
17 comments
Read more

January 28, 2020
I created Sour Topics as a platform to spread awareness on any topic that can be regarded with feelings such as disappointment, anger or resentment. I believe these dark emotions only spread like cancer in your life unless you confront them directly. Please subscribe to the Sour Topics Podcast for a light-hearted, engaging and entertaining discussion on life's nuanced aberrations. About me  My name Devin Williams I am a writer and father of 4. I reside on the Eastern Shore of Maryland, USA. Laugh now, Die later. Find me here: Twitter @sourtopics Instagram @devinism_blog Sourtopics@gmail.com
Read more